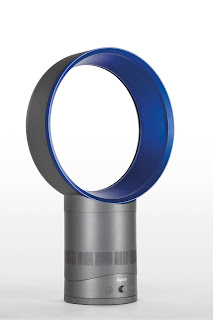 On a recent visit to a gadget store or white appliance retailer you may have spent a few moments playing with Dyson’s ingenious Air Multiplier. The Birmingham Gazette was keen to find out more about how a fan without blades essentially worked?
Dyson Air Multiplier(tm) fans work very differently to conventional fans. They use Air Multiplier(tm) technology to draw in air and amplify it up to 18 times, producing an uninterrupted stream of smooth air. With no blades or grille, they’re safe, easy to clean and don’t cause unpleasant buffeting.

Air is transported upwards through the fan, and as it makes its way through the “loop amplifier”, the air is accelerated 15-times as it’s squeezed through a 1.3mm aperture around the ring. Sticking your hand through the loop, you’ll feel air only in front of the ring because that’s where you’ll find the aperture. It’s a strange sensation but you just can’t get enough.

While it’s not the cheapest fan on the market, and critics often point this out, I think on the other hand well why should it be? Dyson is one of the true great inventors of our time, so being able to own one for a little over £200 really isn’t that much for a luxury item or gadget which adds a sense of luxury to any space or room.

When you explore the Air Multiplier further, you notice that as well as its unique styling, it has a number of other functions which are refreshing to play with such as the dimmer switch which controls the speed of the air. Conventional fans usually only have 3 settings for speed. The colour is another design winner, in a glorious effort to offer the consumer who has it all, even more, the Air Multiplier can be adapted with your own tailored customised colours.

The problem with conventional fans is that they have limited settings, they’re awkward to adjust and the blades cause buffeting because they chop the air before it hits you. Not only are they awkward to clean but they are also quite dangerous and the blades need the safety grille to guard them.

Already, Dyson’s Air Multiplier technology is helping the National Health Service keep patients cool on wards. I for one am excited to learn of future Dyson inventions, and The Birmingham Gazette will be sure to keep you posted as soon as we hear of a new arrival.