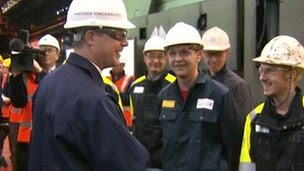 A £5 million fund to help businesses across the West Midlands is set to be administered by the Birmingham Post, after the newspaper’s proposals for supporting employers won Government backing.
The Post has won a share of the £1.4 billion Regional Growth Fund, designed to give employers access to capital to help them create jobs.
Nick Clegg, the Deputy Prime Minister, announced that 119 schemes across the country will receive a total of £950 million, including 22 schemes in the West Midlands which will receive £100 million between them.
Ministers say the cash will create or safeguard 3,900 West Midlands jobs directly, as well as 29,800 jobs in the supply chain.
The Post’s scheme is to receive £5 million, which will be distributed to other local employers.
Businesses will be invited to apply for smaller grants which are not available directly from the Government.
The minimum bid for Regional Growth Fund money is £1 million, but there have been complaints that this effectively excludes smaller firms which are unlikely to need such a large sum.
Ministers responded by looking for local partners with strong links to business communities in their region, who would be able to apply for a grant and then parcel the money up to distribute to smaller businesses.
Mark Prisk, the Minister for Business and Enterprise, said: “There was concern that by having a sensible threshold of a million – so that we aren’t spending a lot of money proportionately on the administration of those very small schemes – that we might rule out the opportunity to help with local programmes with small and medium sized enterprises.
“So several newspaper groups have stepped up to the plate and offered to co-ordinate the funding.”
A scheme already operating in Liverpool, managed by the Birmingham Post’s sister paper the Liverpool Echo, had been issuing grants of £10,000 upwards, he said.
“If you are dealing with a £1.4 billion fund then you can’t start sending out packages of £10,000 because the cost of administering that doesn’t make sense.
“So the Birmingham Post have stepped in.”
He added: “I very much welcome the newspapers’ role in this, together with local chambers or whoever the appropriate body is in their area.
“We are working with good solid local newspapers who are caring for their community.”
Related Items:Birmingham Post
Share
Tweet
Share
Share
Email