The incredible journey of the Poppy Factory 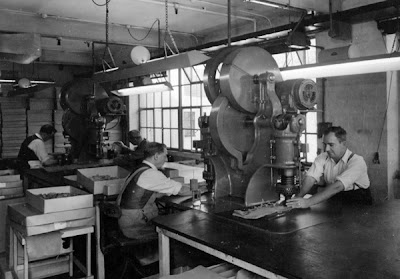 The Poppy Factory, explains the story behind the red commemorative poppies and the ex-service men and women who make them.

With the death of the last First World War combatant earlier this year, another of the human threads connecting us to that time fell away.

But in a white factory building by the Thames, there is an unbroken link between modern ex-service men and women and the soldiers who came back from the 1914-18 war, wounded and in need of work.

The building is the Poppy Factory, and for nearly ninety years it has provided a safe place to work for people who face challenges in civilian life.

Tony is 57 and left the army after being badly burned on a training exercise.

“I was on the sick for three years. Basically I’d been written off. I do have psychological problems and in the end I just couldn’t work because of panic attacks. There’s no other way I could get work unless I came through a supported programme.

“I make as many poppies as I can, but in the background there’s no stress or anxiety about having to do a certain number.”

The Poppy Factory was the creation of Major George Howson, an engineer with remarkable energy and imagination. His family still talk of the pulley he rigged up across his large garden, and the bridges he built across stream at the bottom.

He had a genius for connections. After the success of the first Poppy Appeal in 1921, when flowers had been imported from France, he could see the need for British poppies. And as founder of the Disabled Society, he knew the plight of wounded soldiers. So he put the two together.

But he wasn’t optimistic about his plan to set his men to the delicate, repetitive task of making poppies. “I do not think it can be a great success,” he told his parents in 1922.

His workforce of five grew quickly, and within a few years more than three hundred and fifty men were meeting the entire demand for Remembrance poppies, along with a sister factory in Edinburgh. The Poppy Factory moved to Richmond, where it still stands.

Though it’s a smaller team now – some of the work is done by home-workers and machines at the Poppy Appeal headquarters – millions of poppies, wreaths and crosses are still made in Richmond.

Barry spent thirty years in the Royal Navy. He has a box of chocolate éclairs at his feet, family pictures around his desk, and a shelf of Abba albums and greatest hymn collections. It’s repetitive work, clicking together the plastic and paper to make poppy after poppy, but he cherishes the environment.

“I always wanted to visit the Poppy Factory, never thinking I’d ever work here. I was indoors for three years with arthritis. They’re lovely people to work with.”

Bill saw a poster about the factory when he was visiting the organisation Combat Stress in Leatherhead.

“You get a lot of military banter, but if you start to feel uncomfortable for some reason and want to back off, then they let you be quiet. It’s a safe environment for ex-service people with certain problems.” 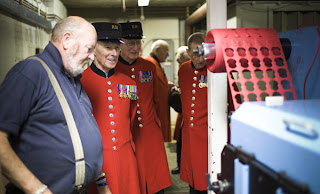 The 1920s soldier wouldn’t recognise the spacious factory floor and working conditions. But the need for mental space and time to find your own working rhythm hasn’t changed. Neither has the importance of jokes. Before coming here, Bill says, he did a horticultural course, but then couldn’t find a job.

“I’m still working with flowers though.”

← Philpotts outperform the competition for business lunches on the move