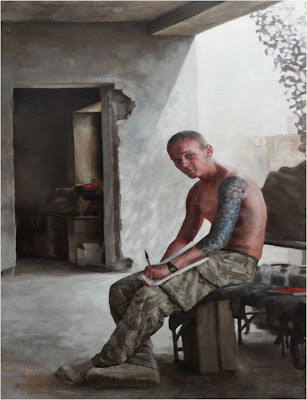 Danny Howes has been painting for a number of years, but earlier in 2011 he reached new heights showcasing his first public works at an exhibition held at Reuben Colley Fine Arts in Moseley.


The exhibition was hailed a success selling many works within hours of opening.

In the past few months, Danny has been busy in the studio once again, creating a series of paintings inspired by the war in Afghanistan and one painting in particular has been donated to the Help for Heroes 2012 Auction, raising vital funds for service men and women injured at war.

The portrait, ‘A Letter to Home’ will form part of the new exhibition by Danny Howes that will be held in late Spring 2012. The collection named‘Unguarded Moments’ will be based on the soldiers out in Afghanistan, showing a side of life out there that we rarely get to see on television news reports or in the news papers. ‘A Letter to Home’ will be on show in the window of the gallery until the afternoon of Friday 4th November.

Danny said: "For a decade we’ve seen the war in Afghanistan unfold through the eyes of the media. During this time I’ve often felt unease with our involvement there, while conversely my support for our troops doing an incredibly difficult job has never wavered.

I was lucky enough to gain some insight from a friend who is an army doctor and keen amateur photographer. He allowed me access to photos he’d taken during his last tour, not the usual shots of war on the front line but predominantly of the servicemen and women in more relaxed surroundings when not out on patrol in the desert. I found the photos both inspiring and the perfect source material to use for the paintings.

My intention is for these paintings to convey a more unguarded and personal side to the soldiers’ lives, documenting the ordinary things we seldom see – cooking, reading, doing the laundry, writing to loved ones, sharing a meal – activities we all take for granted back home yet are essential for them to help retain some normality in the uncertain and extreme environment they live and work.

The painting given to the Help for Heroes auction captures a personal and timeless moment - a young soldier taking time to write a letter to his family. I wanted to acknowledge this crucial support played by families and organisations helping the soldiers back home, and donating one of the key pieces from the show to the Help for Heroes auction seemed a fitting way to make a my own contribution."

Each beautifully painted canvas Danny creates captures the soul of the subject in such a convincing manner we feel like we already know them and can empathise with their experiences, good or bad. Danny tells a story about the people he sees, often using the power of the eyes to reveal all. In Howes' work the eyes truly are the window to the soul.