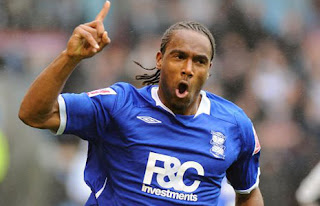 Birmingham have agreed an undisclosed fee with Stoke for striker Cameron Jerome, The Birmingham Gazette understands.
It is also believed prized centre-back Scott Dann is in Blackburn for talks and a medical with Rovers but a fee is yet to be agreed.
Transfer deadline day promises to be a hectic one at St Andrew's, with a number of comings and goings in the pipeline, but it is those of Jerome and Dann which appear set to grab the headlines, although there remains plenty of time for rival clubs to steal a march.
Bolton remain heavily linked with a move for Jerome while QPR have been tracking Dann, for whom a move to Arsenal or Liverpool appears unlikely to materialise.
Jerome is now expected to hold talks at the Britannia Stadium over a move to Staffordshire, with a fee likely to be in the region of £4million.
Blues, whose financial struggles have been well documented since their relegation from the top flight, rejected a bid of around £3million from Fulham for the 25-year-old earlier this month.
But Potters boss Tony Pulis has long had an interest in the former Cardiff marksman, and saw a double bid for Jerome and Dann rebuffed by Birmingham's hierarchy earlier this summer.
Dann, meanwhile, appears to be closing in on a move to Ewood Park following a summer of speculation over his future.
Blackburn boss Steve Kean worked with the former Coventry defender during his time as assistant manager to Chris Coleman at the Ricoh Arena.
Kean is in the market for a centre-half following Phil Jones' summer switch to Manchester United and Dann would see the switch as a chance to move back closer to his Merseyside roots. Yet it is believed there remains the stumbling block of agreeing a fee with Birmingham and that could allow rival clubs the chance to step in ahead of Wednesday night's 11pm deadline.