The tale of Jimmy Cregan and Jimmy's Iced Coffee 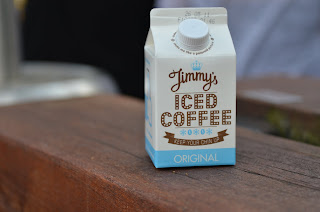 When it comes to coffee, there’s nothing I miss more about my homeland of Mykonos Island, Greece than a Nescafe frappe. It’s the staple drink for most Greek’s on the move but back in Britain there’s nothing that quite hits the spot on a hot summer’s day, and the last thing I’d be seen dead with would be a Costa substitute that just doesn’t meet the mark.

Every now and then though, a product comes to market which I just can’t get enough of and so I was thrilled to discover Jimmy’s Iced coffee is at last coming to Birmingham.

Hidden behind a hefty beard and a cheeky little laugh, Jimmy Cregan is one of the most positive people emerging in food right now. Based in Bournemouth, East Dorset, where a young and energetic food scene appears to be thriving, Jimmy and his sister Suzie have created something entirely unique to the British market and in doing so have satisfied a craving for an unlikely, yet hugely popular cold drink. It soon becomes apparent there has always been an entrepreneurial force within Jimmy, from selling rucksacks to his friends at junior school, to setting up a beer delivery service for the beachhuts on Mudeford spit. Acurious energy has driven him to develop his ideas and put them into action. Enthusiasm exudes from him and infects everyone he meets.

A little under a year ago Jimmy had an idea. That idea, born whilst traveling in Australia and nurtured whilst surfing the beaches of Bournemouth, is now stacked across the refrigerated shelves of Selfridges food hall, Harvey Nichols and a slew of fine food delis, and from all accounts, the phone just doesn’t stop ringing. Jimmy’s Iced Coffee is growing rapidly. In essence, it’s like a coffee flavoured milkshake and with its pick-me-up hit of caffeine Jimmy’s Iced Coffee is often described as a grown up energy drink. Jimmy and his sister Suzie set up the company and have since been on a whirlwind ride getting the drink to market. “Neither of us had any experience in food production,” explains Jimmy, “Suzie owns a café in Christchurch but there’s a world of difference between making a cup of coffee for someone, to making a product fit for retail.”

Their hard work and late nights paid off and after countless emails and phone calls, a packaging manufacturer flew down from Manchester to meet them. “That’s when things really started to slot into place,” Jimmy recalled. “We’ve found the more you believe in something the more everyone else seems to listen. They try, taste and believe what you do too.”

So, why iced coffee? “When I got talking to people, there were so many others who missed it from their travels too. No one else was doing it and I just knew it could work. You know, sometimes you just have that feeling.”

Amidst the rapid growth, popularity and frightening workload, Jimmy holds a smile behind his thick beard. It makes you wonder whether it’s the iced coffee that gives Jimmy such an abundance of energy, or the other way round.

Jimmy’s Iced Coffee goes on the shelves at Selfridges Birmingham in the next few days.