Roy Ayers and Pete Rock live at the Hare and Hounds 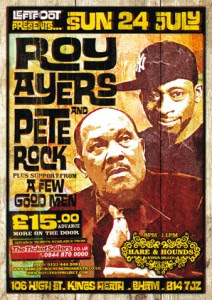 After sell out performances at the Hare and Hounds, one of Birmingham's finest music establishments is bringing the legendary Roy Ayers, American funk, soul, and jazz composer and vibraphone player back to Birmingham. For anyone who didn't catch his last performance, this is another chance to catch the musical genius at work.

The venue which borders the high street and popular York Road in Kings Heath is excited about welcoming the pioneering collaboration between jazz master Roy Ayers Hip Hop/DJ wonder PETE ROCK. The show will feature exciting rendition’s of Roy’s most celebrated hits – Everybody Loves the Sunshine, We live in Brooklyn, and many others – with Pete Rock sampling Roy’s music and adding a hip hop flavour with his beats and rhymes.

Constantly performing and recording since the 1960s, Ayres is one of the most famous jazz vibraphonists in the world. He has produced some of the most loved modern soul-jazz records of all time such as “Running Away”. 2004 saw the release of “Virgin Ubiquity: Unreleased Recordings 1976-1981” which were ‘lost’ sessions tapes that he had discarded. Radio One DJ Gilles Peterson described this as the equivalent of finding a lost Beatles album. No doubt this helped him win the Gilles Peterson 2004 Worldwide Lifetime Achievement Award. Roy Ayers is ageless and evergreen and as per the title of another one of hits, remember “We All Live In Brooklyn Baby”.

Rapper, DJ, and producer Pete Rock first emerged in 1991 as one half of a duo with C.L. Smooth, debuting with the All Souled Out EP. A hit LP, Mecca and the Soul Brother, followed before the two went their separate ways in the wake of 1994’s The Main Ingredient, with Rock remaining a prolific studio presence prior to the release of his solo debut, Soul Survivor, on Loud/rca four years later. He then continued his career as an independent producer, and later signed to Rapster/Bbe in 2001 for PeteStrumentals. Two years later, the label released a two-part compilation of mid-’90s LPs with Lost and Found. In 2004, Rock produced the sequel to his debut, Soul Survivor II, with features coming from Pharaohe Monch, dead prez, Talib Kweli, and former partner C.L. Smooth.

Advance tickets for this NOT TO BE MISSED event are available from www.theticketsellers.co.uk or by calling 0844 870 0000