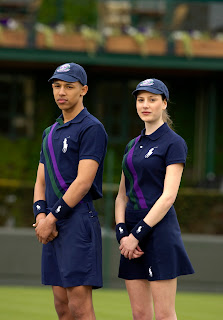 Polo Ralph Lauren (NYSE:RL) continues its global partnership with the All England Club as an Official Outfitter of The Wimbledon Championships through 2015, designing uniforms for all on-court officials including chair umpires, line umpires and ball persons. Polo Ralph Lauren is proud to present newly designed Ball Girl and Ball Boy uniforms in recognition of the 125th Anniversary of The Wimbledon Championships.

“Wimbledon is a premier sporting event and we are honored to be a part of such a long-standing tradition in the history of tennis,” said David Lauren, Executive Vice President of Advertising, Marketing and Corporate Communications.

In 2006, Polo Ralph Lauren became the first designer in Wimbledon’s history to create official uniforms for the tournament. Inspired by the elegance and sophisticated heritage of English tennis, this year’s commemorative polo shirts are designed with an embroidered “125th" logo, an anniversary crest and purple-and-green cross-body stripe, reflecting the traditional colors of The Championships. In addition to the logo and crest, the sporting white shirts showcase an embroidered Union Jack flag motif.

“We are delighted that Polo Ralph Lauren is celebrating our 125th Anniversary with a newly designed ball boy and ball girl shirt” says Ian Ritchie, Chief Executive, All England Club, Wimbledon. “There is such affinity between the two iconic brands – the pursuit of excellence, the rich history and timeless elegance – and we look forward to maintaining and enhancing our partnership in 2011 and beyond.”

This partnership reinforces Polo Ralph Lauren’s leadership in major sporting initiatives. The company also serves as the Official Apparel Sponsor of the U.S. Open Tennis Championships and will be the Outfitter for the U.S. Olympic and Paralympic Teams at the London 2012 Olympic Games. Polo Ralph Lauren also sponsors an elite roster of professional golfers, as well as the Black Watch Polo Team.

A representative from the All England Club states: