The Ghost city that has appeared above the Xin'an River 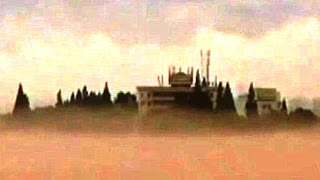 It looks like any other cityscape or skyline, with a few trees and mountains in the background except for big difference, it isn’t real!

A giant mirage has appeared in the sky above the clouds near East China after heavy rainfall and humid conditions along the Xin’an River.

As fog settled over the river in the late afternoon, skyscrapers and other buildings appeared to rise out of nowhere, leading residents in nearby Huanshan City to speculate that the vision could be a “vortex” to a lost civilisation.

One resident told a local news station, “It was electrifying. It looked like a scene from a science fiction movie but it was here in real life, I can’t believe it to be honest”.

The mysterious ghost city had vanished almost as quickly as it had appeared.

However scientist have as they often do, been quick to quash the ghost city vortex theory and have a simple explanation for what could be seen.

They believe it may have been a mirage, caused when moisture in the air becomes warmer than the temperature of the water below. Although many are saying it looks nothing like the city below.

When sunlight crosses from the colder air to the warmer air the rays of light get refracted or bent – creating a reflection in the air that looks similar to a reflection in water.

It's a common sight for many travellers on Australian roads. But Australians simply see puddles of water that disappear when you get close, not entire cities floating on rivers.