They call it a Super-Earth 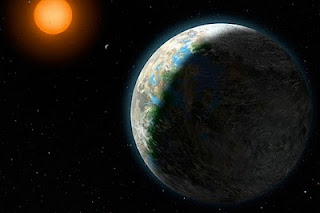 
Gliese 581 g, is an extrasolar planet, orbiting the red dwarf star Gliese 581, 20.5 light-years (1.94×1014 km) from Earth in the constellation of Libra. It is the sixth planet discovered in the Gliese 581 planetary system and the fourth in order of increasing distance from the star. The discovery was announced by the Lick-Carnegie Exoplanet Survey in late September 2010, after a decade of observation.

Studies indicate the planet is situated near the middle of the habitable zone of its parent star, where temperatures are neither too hot nor too cold. If it is a rocky planet, favorable atmospheric conditions could permit the presence of liquid water, a necessity for all known life, on its surface. With a mass 3.1 to 4.3 times Earth's, Gliese 581 g is considered a super-Earth, and is the planet closest in size to Earth known in a habitable zone. This makes it the most Earth-like Goldilocks planet found outside the Solar System and the exoplanet with the greatest recognized potential for harboring life.